After its introduction (about three years ago) the Fenix TK75 became an absolute sensation: that much power from such a compact flashlight! In the meantime many TK75’s have found their way to happy customers. After a small upgrade about a year later, Fenix has outdid itself once again with new improvements. This version has been given the appropriate name of Fenix TK75-2015. The most striking detail is the fact that this edition has been enhanced with four instead of three XM-L2(U2) LED lights increasing the output with a whopping 1100 lumens. Because this isn’t the only difference we decided to put them to the test in this review. Part of this test is going outside to see what an additional LED light adds to the 2900 lumens edition.

The plastic storage cases, which are incredibly useful when you want to store your flashlight when you are not using it are, except from the stickers and the cardboard wrap, identical. In terms of contents we discover a striking difference: The Fenix TK75 2015 comes with a shoulder strap, which is an excellent addition.

At first glance, or when you look at the lights from a distance, you won’t really see any differences. Only the number of LED lights in the head stand out. Upon further inspection it appears that Fenix definitely updated the light. I will demonstrate some of the major differences with a couple of photographs.

The Fenix TK75 is a substantial flashlight which, despite its size, can easily be used. The newer version feels slightly better in hand because the structure of the body has been modified. Both lights have been enhanced with two buttons you can use to control the light, but the icons immediately give away that they don’t work the same. The old TK75 has an on/off and a mode button, the 2015 has been enhanced with an on/off button in addition to a mode switch and a ‘shortcut’ to immediately switch to the turbo and stroboscope mode. The old version will, as a result, immediately be turned on. With the new edition, however, you will have to wait a little while. The advantage of the new controls is that you can immediately switch between the light modes. The left switch (with the sun) will, when you briefly press it down, switch to Turbo mode. When you press it down a little longer you will reach the stroboscope mode. The immediate modes are ‘fixed’ which means that you can’t use the right button to switch between modes. You will quickly get used to the new controls and they are, I believe, a little better set up than those on the old version. The immediate turbo mode is a wonderful addition!

I can be very brief about the normal light modes: those are identical. However, when you look at the special modes you will find a couple of differences: for instance, the 2015-edition has an immediate turbo mode while the 2900 lumens edition has a SOS mode. I honestly can’t tell you why the SOS mode is no longer used on the 2015 edition.

Because Fenix added an additional LED lights to the same-size head you will definitely notice this in the profile of the light. The three reflectors in the old edition had to make some room for the fourth LED light. As such the reflectors aren’t located as deep, something you also see in the profile of the light. As a result the hotspot of the Fenix TK75 2015 is larger, but less intense leaving you with a smaller beam distance, but a more even beam. In terms of beam distance you can’t complain about either flashlight: it is amazing and very impressive to see that you can easily highlight objects located hundreds of meters away!

Below you can see what the light profile looks like when I point the light at a white wall. Characteristic for this light is the ‘flower shape’ which is the result of the fact that each LED light has its own reflector and, therefore, its own beam. It is amazing that the manufacturer was able to make the hotspot beautifully even and round.

Of course we will also take these lights outside! First we will point them at a couple of trees and their surroundings. Here you can clearly see the difference in the strength of the light: the 2015 edition more clearly lights up objects while the 2900 lumens edition has a more powerful hotspot. This difference is also evident when you point both flashlights at a forest path. To get a realistic idea of what you really see I have set the shutter speed at four seconds.

The TK75 was, and still is, an amazing flashlight! The amount of light remains amazing. In addition, Fenix definitely guarantees quality and the controls are really simple. It is not your everyday flashlight, but a perfect search light on a boat, for security purposes or when you are out at night and need a massive amount of light. Lighting up your work station in winter is a piece of cake with the tripod extension. And, we definitely won’t forget about the enthusiasts.. for many out there it simply is an amazing piece of technique to own.

If you already own a TK75, the updated controls, the tripod extension and the shoulder strap are (in my opinion) the most important reasons to purchase the newest edition. The lockout mode, the power indicator, in addition to the fact that the light, in case of an emergency, can be used with two 18650 batteries, could also be aspects that will make you decide to choose the TK75-2015 edition! 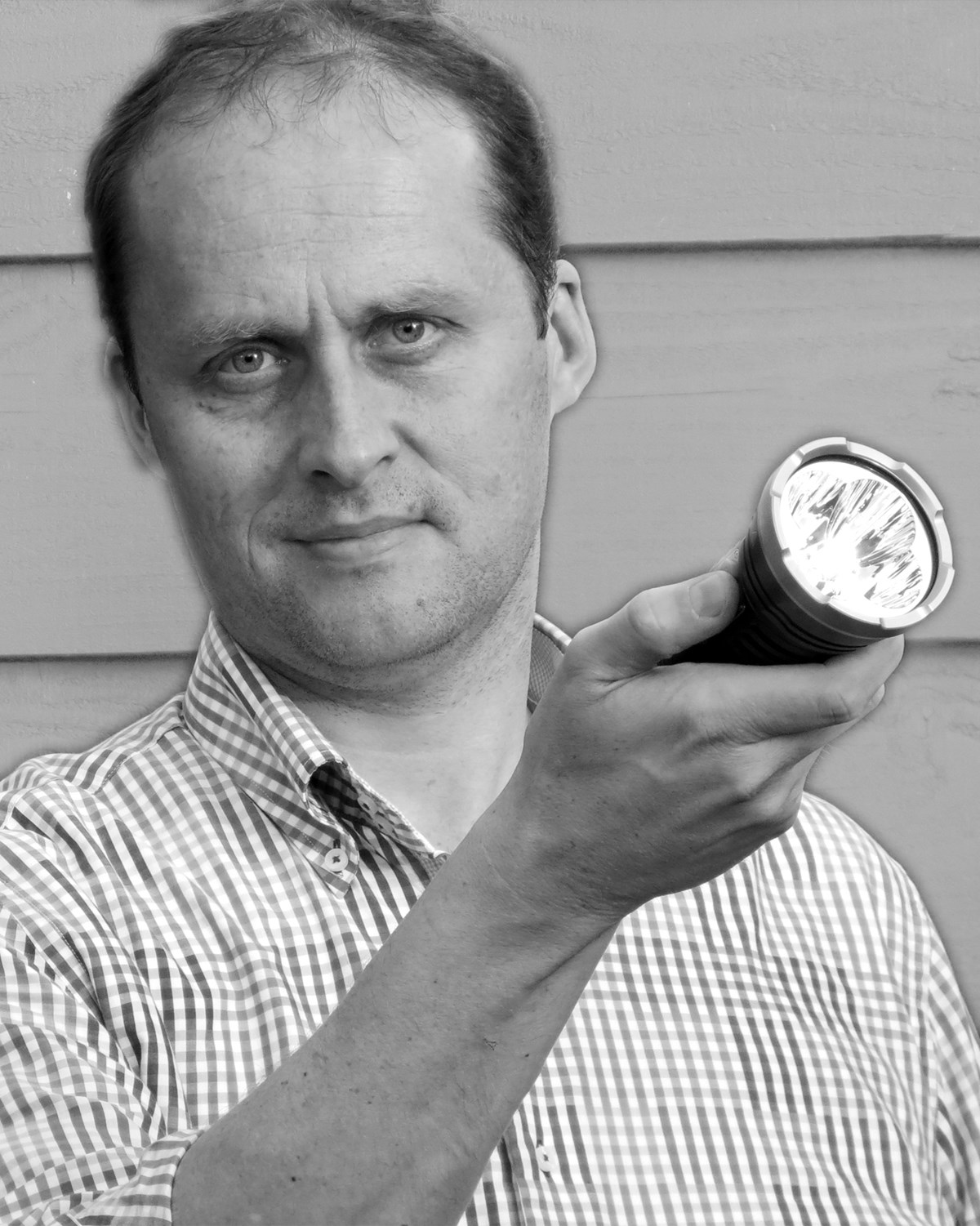 Ever since he could walk Koen has been interested in lights, wires and batteries. As a child he was always working with dyno torches, bike lights and electrical boxes. The krypton and halogen lights were replaced by LED lights. A couple of years ago he discovered the ‘professional’ stuff. His first brands were Led Lenser and Fenix. Photography is also one of his hobbies. In addition to nature and meteorology Koen loves to show others what a light can do and what its beam looks like at night. Koen’s reviews can often be found on forums such as candlepowerforums.com and taschenlampen-forum.de. Throughout the years Koen has collected lights in practically any category: from small and compact to enormous powerhouses.